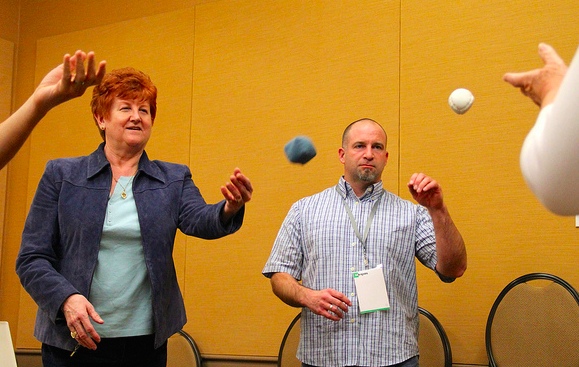 Group Juggling is a great, high-energy active icebreaker activity that helps participants learn the names of the other people in the group.  It works best when it is played in groups of about 15-20 people.  If you have more than this number of players, you can divide into smaller groups.  This game can also serve as a teambuilding activity if people do not know each other well.

Setup for the Group Juggling Activity

This game is best played outside in a grassy area, or in a large, open space indoors. You will need several soft balls/tennis balls or other soft fun objects, like rubber chickens and stuffed animals. Dog toys (preferably unused) make great choices too, as they usually come with great sound effects. Bowling balls are not recommended.

Ask the group to form a large circle, with everyone facing the center. Start by tossing the ball across the circle to another person. As you toss, say the name of the person you to whom you are tossing. This lets them know the ball is coming to them and lets everyone hear their name. Once that person catches (or retrieves) the ball, they pick someone else, shout their name and toss them the ball. Play continues with the one ball until it makes it to everyone in the group. Once someone has received the ball, they cannot get it again. Last person in the group throws it back to the group leader. Practice the pattern a few times, always tossing to and receiving from the same person in the group. Once your group has the pattern down, start adding additional balls/objects, this is where the mayhem really begins. Keep going, try to get at least five objects going at once. Feel free to try again with a new pattern and mix it up.

This game takes about 10 minutes in a group of 20-30 people. If you have more than 30 players, consider dividing into two circles to keep the throws within easy catch and toss range.

If having too many objects makes the game too chaotic for your group, you may also reduce down to one ball.